On the 10th October, POM Limburg organised the seminar “Hydrogen, the fuel of the future?” as part of the EMR H2 Booster project. 180 participants were introduced to the potential and challenges of hydrogen at the T2 campus in Genk.

Nine partners – including POM Limburg – are joining forces in the Interreg project EMR H2 Booster to develop a green hydrogen economy in the Meuse-Rhine region. The aim is to connect parties and initiatives, but also to accelerate innovation in the hydrogen chain to create sustainable growth and jobs.

Decarbonisation
During the seminar, several speakers gave insights on the latest developments and technologies in mobility, industry and energy storage. Vice-president of Air Liquide Diederick Luijten: “First of all, we are looking at sectors that are difficult to decarbonise. I am thinking of heavy and long-distance transport, shipping and aviation, but also the steel and chemical industries. For other applications, we are rather looking at battery-electric energy sources.”

Demo market
Innovations in hydrogen from Limburg were demonstrated at the information and demo market. Participants were introduced to hydrogen applications, such as the hydrogen truck from Lommel-based company E-Trucks Europe. In addition, e-power from Nieuwerkerken and AMS Belgium from Bilzen presented their hydrogen generator and tanks, respectively. Finally, attendees also had the chance to test drive a hydrogen car.

Hydrogen stations in Limburg
Hydrogen has the wind in its sails, but there are still some hurdles to overcome. “You can compare the hydrogen story to a marathon: perseverance is required. That’s why we had to build a filling station for our first hydrogen car,” says Adwin Martens, general director of WaterstofNet.

Have a look at the pictures of the event.

Want to learn more about hydrogen? Register for the next EMR H2 Booster event on 21 October! 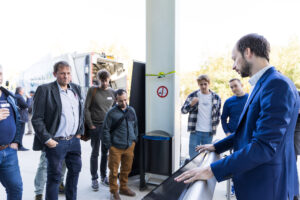 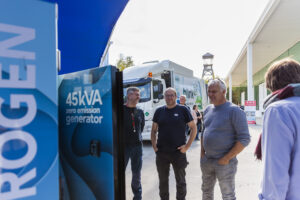 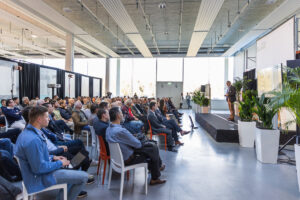 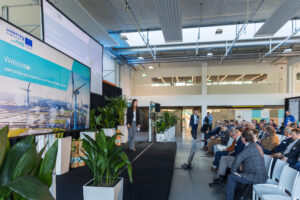 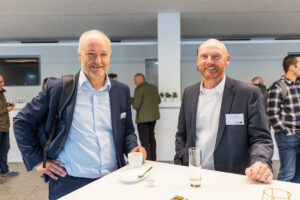